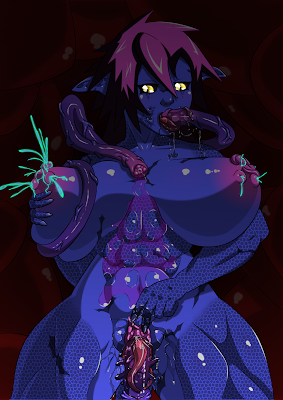 Gaah... Finally I finished it. It was really much more time consuming picture that I had expected, but it was totally worth it. I'd say the improvement to my older pictures is astronomical. It wasn't easy though, I had to do a few compromises. I originally planned that Proserpines (An alien species she represents) wouldn't have hair, but I just couldn't come up with anything else satisfying. Another thing was that I thought that I'd add lost of cum spewing out her vagina, but I still can not make cum too well, and I ran out of patience to try. Otherwise the picture is a great success in my opinion. I had to face various challenges making this picture, the first was the lineart. I have never drawn a picture that is like looking up or down at someone, and I hadn't drawn really muscular character before. I did of course look at an example for the muscles, and I think I nail'd, both the muscles and the perspective. The next challenge was the colors, yet another first time for me. With the power of image>adjustments I found good colors, though it was hard to decide on them. I think I had few nice little ideas while doing the picture. First, the "milk" that glows peculiarly. It's quite interesting. Second the shadow and the glowing eyes give a nice little touch. I like the whole design actually. Like the four nipples on each breast, the six tentacles coming out of her back (you can only see four, but there's six.), the two clitorises, and so on. Makes her look a bit more alien.

I guess I should Introduce her too. Her name is Iqila, and as I briefly mentioned, she is of an alien race called Proserpine. You can read more about both Proserpines and Iqila, by browsing the pages. I also try to add all kinds of information as I go on with my project of drawing 103 OCs. I start to wonder, if I ever draw Iqila again. Or moreover, do I ever finish 97 OCs. That remains to be seen.

Here's a link to my other blog, which contains music, photographs, youtube videos, game development stuff and drawings that are a bit less perverse.

Eromanboy
What seems to be an ordinary guy, is actually the worst pervert.